Engineer and honorary Doctor of Technology Per Gillbrand passed away on the 30 November 2016 at an age of 82. Per was born in Tidaholm on the 23 March 1934 and was a well-known personality within the worlds motor industry. Per leaves behind him his wife Inga, children Peter and Ebba and their respective families.

We both had the privilege of working closely and getting to know Per already at Volvo in the late 1950´s / early 1960´s, and later throughout his career at Saab. Right from the beginning we knew that there was something very special about this young man from Tidaholm.

At an early age Per was taught the basic principles of engine technology by his father Evald Gillbrand, a Paint shopkeeper. Whilst discussing engines, his father explained in his special way. `You understand Per, if there´s petrol at the carburettor, compression in the cylinders, and a spark at the plug, then, if it still doesn´t start -then there is something wrong with it!

It was these three main parameters relating to the fundamentals of internal combustion engines -The fuel/air ratio, the cylinder compression ratio, and the Ignition timing, that interested Per and to which throughout his life he closely studied, almost to a point of perfection.

At an early age, it was clear to see which career path Per would follow. After completing his degree studies in Engineering at Chalmers Technical College in Gothenburg in 1955 he obtained his first career position as a Test Engineer at Volvo Pentaverken in Skövde. His talent was quickly recognised and he later became one of the team responsible for developing Volvo´s acclaimed B18 engine with a 5-bearing crankshaft design. This engine was installed in the Volvo´s PV544,Duett, Amazon and the P1800 series. For this new assignment Per moved his office to Volvo´s Engine Development department in Gothenburg.

In 1964 he was recruited by Saab in Trollhättan to be involved in the company´s transition from 2-stroke to 4-stroke engines and which finally resulted in a Ford V4 engine being introduced in the Saab 95/96 series. The adaption and initial development testing of the V4 engine in these vehicles was performed solely by Per during a short period of residence with his family at Lake Garda in Italy.

His next assignment was the development of a Triumph engine for the Saab 99. This work was undertaken together with Recardo and Triumph in England.

After the merger of Saab and Scania in 1969, Saabs engine development was moved to Södertälje with Per being given the position as head of the Engine Laboratory.

During this time the Saab 2,0 litre engine was developed and was later manufactured in Södertälje. Since then, several versions of this engine have been made and has been the most dominant engine type used in Saabs model range, from the Saab 99 and including also the Saab 9-5.

Per was also known to be the man who tamed the Turbo-charger, being given the nick-name `Turbo-Pelle´ from his colleagues. Per proved that by including an exhaust by-pass valve (waste-gate), turbo chargers could be used in normal standard production vehicles.

In 1977 Saab was first to include this technology in a production vehicle creating an immediate sales success for the company. Today most auto manufacturers include turbo-charged engines in their model range.

In 1988, together with his colleague Bengt Gadefelt at Scania, Per was awarded a Gold Medal from the Swedish Royal Academy of Sciences for his research work. Later, in 1992 he received the title of Honorary Doctor of Technology at Chalmers University in Gothenburg.

After the success of the `Turbo´, development continued with numerous innovations bearing his signature i.e. Saabs APC-system, the 16-valve engine, Saab Trionic. Several other inventions, for various reasons, remained only in the experimental stages of development.

We both can recall in the middle of the 1980´s where Per once explained that the piston engine possessed a yet untapped potential -He had early established that with the use of advanced electronics the engines combustion phases could be controlled more effectively.

The demand for better fuel economy and reduced engine emissions required also a certain `downsizing ´ i.e. reduced cylinder volume, however, if the same power and torque levels were to be maintained it was also necessary to be able to vary the engines compression ratio relative to engine load.

At the end of the 90´s Per built such an engine complete with Electronically Controlled Variable Compression – known as the SVC engine. In the year 2000 the SVC engine was presented at the Geneva motor show.

In the 1960´s the introduction of the V4 engine was the salvation of Saab, similarly also the Turbo charged engines in the 1970´s. The SVC engine could certainly have been a huge success for Saab in the 2000´s but wasn’t accepted by GM. It is now 16 years since Per presented the SVC engine to the worlds motor industry. Today auto manufacturers such as Nissan, Infiniti and Porsche currently have long running projects utilising this Technology.

Equally impressive is the dedication and time that Per paid to his own personal hobby. A hobby which he pursued throughout his working life and even in his retirement. Per was intrigued to learn of the thoughts, reasoning and decisions taken by the engineers designing famous historical engines. Per often said, `If you only look forward without looking backwards – then you need to watch out!

Being the person that he was, Per just wasn’t satisfied with understanding the theoretical side of matters, no, he wanted to also understand the practical side too. This led him into building working models of historical engines in the basement of his home in Mariefred. He built more than 40 different working models which he often exhibited at well attended seminars at Universities, High Schools and Veteran Car clubs etc. throughout Sweden and several other countries.

Per has built an impressive collection of working model engines depicting engine development from early times to our present day. (Click on photo to enlarge)

His `farewell performance´ showing his model engines was held on the 9 November 2014 at Berwaldshallen in Stockholm. This was indeed his Grand Finale, tickets to the show were sold -out with over 1000 in attendance. It was clear to see the enjoyment in Per’s eyes as he welcomed our coach filled with more than 50 colleagues and friends who had travelled from Trollhättan. We were convinced that a new decibel record (dBA) had been set at Berwaldshallen when for his final act, Per cranked, and started a full scale 12 cylinder, 22 litres, Rolls Royce Merlin engine. 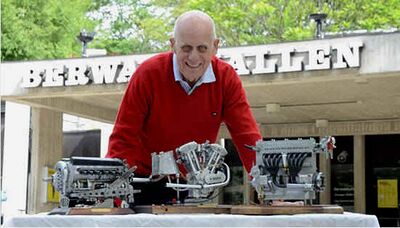 The noise was absolutely deafening and almost raised the roof! A standing ovation followed with endless applaud for Saabs engine genius’s performance. Per Gillbrand was a straight forward, polite and a trustworthy person, always having a sparkle in his eye and new thoughts and ideas constantly going through his mind. Once a person had gained Per´s respect he was guaranteed to have a faithful friend and colleague for life. In his meek and unpretentious way, Per was quite simply one of us, occasionally presenting himself as just a normal car mechanic. He was much more than that, he was indeed an exceptional person awarded with an Honorary Doctor of Technology degree and Gold medal for his many achievements.
Per Gillbrand, was a good friend and colleague of ours for more than 50 years and will be greatly missed but always remembered as Saabs own Engine Genius.
Representing co-workers, colleagues and friends at Saab in Trollhättan 2016 12 28
Olle Granlund
Arne Höglund.