The roots of Saab AB

This is the long version of this article, if you prefer a short version, click here.

When new facts appear or errors are identified, text will be corrected accordingly. 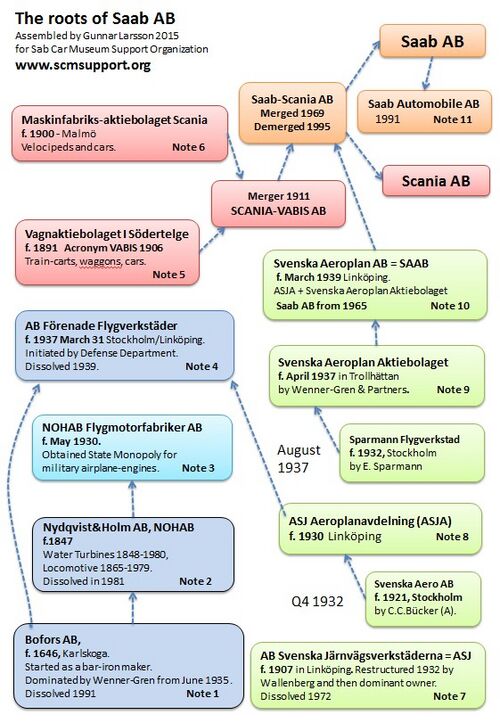 Bofors Hammarbruk AB, a tilt-hammer factory using bar iron as raw material, was founded 1646 in Karlskoga, Sweden. The company was in operation from around 1649 and continued as a rather small factory under many different owners during 200 years.

In 1812 a new owner, scientifically educated, started systematic studies on the iron manufacturing process. From late1860’s steel-maker Krupp was the first company able to produce high strength cast-steel quality to endure the high inner pressure (5000 bar) of the more efficient rear loaded cannons. But their cast-steel still needed to be forged to reach the necessary quality level. For the first time since the1500’s, the Swedish Army bought the superior Krupp cannons in 1879 to be able to get the best cannons.


Bofors this year made a metallurgic break-through for cast-steel after years of systematic trials. Bofors was the first company to produce cast-steel quality strong enough, without the need of forging, to handle the extreme high pressure in rear-loaded cannons. Already in 1880 Bofors could deliver this high strength cast-steel to established cannon maker Finspång, which would complete the rear-loaded cannons and made them ready for use.


In the aftermath of the WW1 peace agreement, Krupp and Bofors agreed on future cooperation in October 1919. To cooperate and use Krupp technology Bofors paid 1,5 million SEK. Bofors also took over Krupp’s blocked orders (12 million SEK).

After emission of new Bofors shares in February 1921, Krupp paid 4.5 million SEK for 25 % of Bofors shares. Transaction was made through an intermediate company called AB Bofors-intressenter (=BI) ≈ Bofors stakeholders/Interested partners. The share capital was 10 000 Swedish Kroner !! This cooperation agreement would create political tensions in Sweden during early 1930s.


BI Chairman Mauritz Carlsson, also a Bofors Board Member, succeeded in 1934 by Sven Wingquist who had negotiated the deal with Krupp in 1921 as Chairman of the Board for Bofors! Sven Wingquist is inventor of the spherical ball bearing and founder of SKF AB. in. He was CEO from 1907 -1919 when he left the company but remained on the Board of Directors.


German armament industry intensified its activites operations from 1934 and Bofors cooperation with Krupp was no longer acceptable for the Swedish government. Dr. Sven Wingquist, Bofors CEO at the time , succeeded after long negotiations to convince Krupp to give up its control of BI-shareholding of Bofors. From a Swedish perspective this ownership was very politically sensitive at the time.


The shares in Bofors-intressenter” were sold in Private Placement June 4th 1935 to Swedish owners. Axel Wenner-Gren (at the time major owner of a few companies e.g. Electrolux) bought the major portion of these shares.


Bofors AB sold of all its sprawling business areas step by step and dissolved 1991. High-tech weapon-systems were acquired fully by Saab AB in 1999. It was owned by earlier spun-off Bofors business area with Saab AB already a minority owner since 1991.

Nydqvist & Holm AB, acronym NOHAB, started as Trollhättans Mekaniska Verkstad in 1847. Manufactured large Water Turbines for electrical power stations from 1848-1980. NOHAB was best known by public as Locomotive maker and produced around 2300 units from 1865 until 1979.

In 1916 NOHAB converted into a public company, with SKF AB as a large owner but selling its shares already 1920. NOHAB got a historic order for goods-train locomotives from Soviet Union in 1920. During 1921-24 all the 500 large steam locomotives were delivered.

AB Förenade Flygverkstäder, acronym AFF (≈ United Aviation Engineering Inc.) founded March 31 1937. The formation of the company was forced on the two owners below by the Swedish State.
Owned by ASJ AB and Nohab Bofors AB as a Holding company. The Swedish Government had an ambitious long-term plan to strengthen the military defence forces. The total number of military airplanes should increase to 257.
AFF was awarded government contract April 1937 to deliver all Swedish produced 165 airplanes (2/3 of 257) within 5 years to Swedish Defence Department.
AFFs task was to handle allocation of development work and production to the competing owners. The owner groups did not agree on how to cooperate.
Activities slowed dramatically in 1939, one of the few decisions the owners could easily agree on!

Vagnaktiebolaget i Södertelge (Wagon Inc. in Sodertalje) f. 1891.
Surahammars bruk producer of iron bars founded a subsidiary to increase the use of iron e.g. railway carriages and waggons. Acronym VABIS was registered 1906. They remained the dominant vehicles in production for more than about 20 years but stopped before the merger in 1911. First motorized vehicle produced was an inspection trolley for railways.
Few trucks and cars were produced from 1902 and 1903. Vabis built a new factory in 1907 dedicated for cars but also used for building trucks. Scania Vabis HQ moved to Södertälje in 1913 where new buildings had been built after a devastating fire. Cars were manufactured in shrinking numbers from 1925-1929, then only trucks and buses.

Maskinfabriks-aktiebolaget Scania (Machine factory Scania Inc.) f. 1900 in Malmö. Scania took over the operation from the English owned Svenska Aktiebolaget Humber & Co producing Humber velocipedes from 1896.
Investor AB acquired Scania AB shares owned by Stockholms Enskilda Bank in 1916, both Investor AB and the bank were Wallenberg controlled.
Scania bought the operation and also produced velocipedes until 1909, but mainly precision cogwheels and steel-rolls. Scania produced the first cars for sale, a series of 5 cars in 1903 called Scania Type A. Type A very similar to the French car Aster.
The engine used is a 1,85 L, 2-cylinder 8 horsepower engine from Kämper in Germany. Car no 4 of 5 produced is on display at Scania Museum in Södertälje.
In 1902 Scania built their first truck, production for customers started 1908.
In 1909 a Scania truck made a famous 3-day 520 km test-and promotion- trip with axles equipped with SKFs newly invented spherical ball bearings.
Scania approached Vabis with a proposal for cooperation that led to a contract in November 30 1910 to merge the companies. VABIS had profitability problems with and merged with Scania in 1911 to form Scania-Vabis AB, HQ in Malmö until 1913. The shares in Scania were valued at 3 times the value of Vabis shares. Engines and cars would be manufactured in Södertälje, trucks and buses in Malmö until 1926.

ASJ Aeroplanavdelning (short ASJA) supplied various ground equipment to Swedish Air Force from 1916. ASJA Board decided to start ASJA in 1930 to develop the Sea-airplane Viking 1 for commercial customers. It was sold from 1931 and was soon succeeded by Viking II.
During the 1930s ASJAs mainly manufactured airplanes on license from companies as Raab-Katzenstein, Junkers (Ju 68K), de Havilland, Hawker Hart, Focke Wulf and North American Northrop/Douglas.
The merger in March 1939 between ASJA and Saab Aeroplan Aktiebolaget, was then named Svenska Aeroplan AB. They developed their own airplanes called L10 and L11. ASJA had 1937 hired a number of American airplane engineers (mostly from Douglas) with design experience of complete metal structure and outer skin stressed skin fuselage. Now often called monocoque design.
The airplanes were called Airplane 17 (Fpl 17) when put in operation.
Linköping produced 75 and Trollhättan 136 of the 4 different versions.

“Svenska Aeroplan Aktiebolaget” was founded in Trollhättan April 20 1937 as a subsidiary to Bofors-NOHAB, with a capital of 4 million Swedish Kroner.
1,5 million was paid by Bofors and 2,5 million from AB ERS (in some sources named AB ARS) a subsidiary of Electrolux AB where Axel Wenner-Gren was CEO dominating owner and represented its voting rights. Gustaf J. Sahlin was given the voting rights for these shares after Wenner-Gren left the Board of Directors in 1939.
He was also CEO for the newly founded company that started with few engineers in existing NOHAB buildings.
New manufacturing facilities for airplanes were built and ready summer 1938.
The factory facilities still exist 2015.
Saab 92 production started there in late 1940’s.

Svenska Aeroplan Aktiebolaget acquired “Sparmann Flygverkstad” (Sparmann Airplane workshop). Austrian Edmund Sparmann founded the company in 1932.
He had worked as a test pilot and engineer at the Austrian company Phönix. Flugzeugwerke A.G. and moved to Sweden in 1919 to demonstrate two different Phönix airplanes for the Swedish Army. He later worked for smaller Swedish airplane makers as a test pilot and test engineer. From 1926/32 he worked for the governmental repair/test centre called CFM. Sparmann Workshop was acquired in August 1937 to get access to the company’s competence.

The new company “Svenska Aeroplan AB” (Swedish Airplane Inc.) was created in April 1939 by combining ASJA and Svenska Aeroplan Aktiebolaget in Trollhättan. Investor AB a Wallenberg controlled company helped financed the deal and is since then together with Wallenberg Foundations dominating owners.
Wenner-Gren major owner of the Svenska Aeroplan Aktiebolaget was now no longer part of the Board of Directors as his share of ownership had been reduced.. NOHAB Flygmotorfabriker remained with Bofors Nohab AB.
HQ functions incl. CEO staff and airplane engineering were placed in Linköping.
Military airplanes have been developed, produced and tested in Linköping since 1939. Airplanes were built until 1948 in Trollhättan. Major components e.g. wings for jet planes were built until 1959 in Trollhättan.
In 1965 the name of the company changed to Saab AB.

Saab Automobile AB was founded by Saab Scania AB and GM (General Motors) each owning 50% and 50% from January 1991.
The very early car activities 1945-47 took place in Linköping managed by Gunnar Ljungström , Chief Engineer for all Saab Car development until 1969.
Before 1972 the Saab Car activities were handled by Saab AB in Linköping. Product Development took place in Trollhättan from 1947 and series production started in 1949.
In 1968 the 50-50 joint venture Saab-Valmet OY was founded in Uusikaopunki,Finland. The JVs first cars were produced in 1969.


In 1972 Saab Car division was formed as one part of Bildivisionen in Saab-Scania AB. The other member was Scania-divisionen.

I have insufficient knowledge how Saab Car business was managed in detail regarding cost accounts inside Saab AB 1945-1972. I am hopeful to find documents in the Saab Car Museum Archives.

Sources for Roots of Saab

Four Biographies about members of Wallenberg family in Swedish